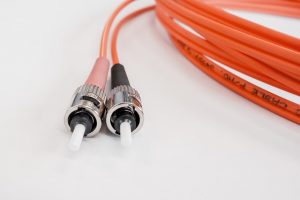 Coonabarabran has a problem that is going to have to be dealt with. Many of you in town will have noticed the NBN rollout here in the last month. The green boxes going up around town (10 of them by our count) and the various line work going on as well.
But there is a problem that is going to affect us all. It’s going to affect future growth for the town and future possibilities. Despite past assurances and efforts by council, it would appear that large parts of the town have been missed in the rollout. If you check the coverage maps on the NBN or Telstra sites, the rollout here has been mapped and the entire industrial area has been missed. Hilton Place has been missed. Everything on the other side of the hill west of town has been missed (think Rifle Range Road, Koala Place and many homes on Timor Rad that currently have ADSL). This is in addition to areas we already knew were going to be missed — Dandry Road, the new homes around the Newell Highway junction, further out on Timor Road.
Maps are added to the post below but you need to use the Telstra rollout map as the best advice — it lets you zoom in and check different areas around town. What the NBN has done is provide exactly enough to fit the current core boundaries of the town and nothing more. But the industrial area — who will want to move a business to an area so close to town that demands they get satellite Internet only? What about new housing expansion? None of the new areas of town where homes are being built will be told they have access to anything except satellite Internet. For homes minutes from town that is absurd. And if you live in Hilton Place — which is in town! — satellite for you too in the future NBN model.
We have to do something about this. NBN has basically said our town is dying and we don’t deserve anything beyond the most meagre of town boundaries. Who is going to move to a town where their fast Internet options are so badly curtailed? What business will want to use an industrial area where their only NBN option is satellite? (For that matter, what is the new Rural Fire Centre going to use for network connectivity?) In 2012 we were told there would be a fixed wireless tower here and that would have helped a lot, but that was removed quickly from plans in 2013 (something we’ve found many people in town still don’t know). And while we have spoken before about our wireless Internet business plans, there are still technical issues with that plan to overcome but the situation now is worse than we imagined. We of course plan to pursue that more rigorously now.
What happens next is also hard to know for sure. NBN planners say that in 12-18 months after fixed line services come online in an area the ADSL service is turned off, BUT copper services stay active for satellite-only customers. When the Coonabarabran exchange serves this whole area and some have NBN fixed line but others don’t, we honestly don’t know what will happen. Usually ADSL is switched off because the NBN service is replacing it, and that is probably what will happen here (leading to large parts of the town and many businesses being forced to use either satellite or costly and inefficient 3/4G wireless) but in this strange case we really don’t know for certain.
We will be presenting this information to council at the Coonabarabran town meeting on Tuesday night (29 November), in an effort to raise the issue further and see what can be done. At the council town meeting in March I was specifically told that the industrial area and Hilton Place were going to be included in the rollout after council intervention, but all available information now tells us this was not correct. I do not blame council for this — NBNco has displayed very little transparency in most of its dealings.
The government does not care about this in the slightest — they have decided the NBN satellite is as good as anything else on offer (something all evidence shows is not true). NBN satellite keeps you with low download limits (70-80GB per month maximum in peak times–an amount we can use on ADSL in 3 days!) and charges upwards of 50% more for that limitation than fixed line or fixed wireless Internet. Satellite should be for truly remote country properties, not for homes and businesses near or even in towns!
So we urge everyone affected by this directly and everyone who just wants a better deal for Coonabarabran now and in the future to make some noise about this. Come to the council meeting on Tuesday, talk to your friends and neighbours, take it further. One way or another we will improve the services in this town. 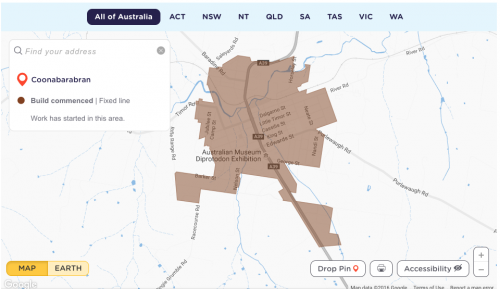 Our rollout according to Telstra. The industrial area and others are clearly left out. Click on the link above to zoom in closer. 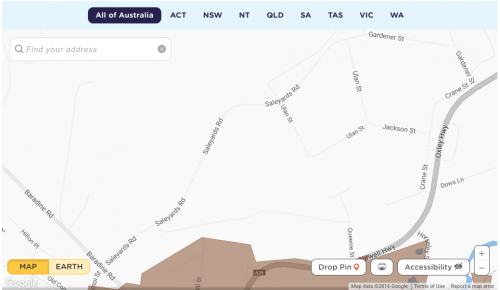 Close view of the area north of town. You can see what is left out. 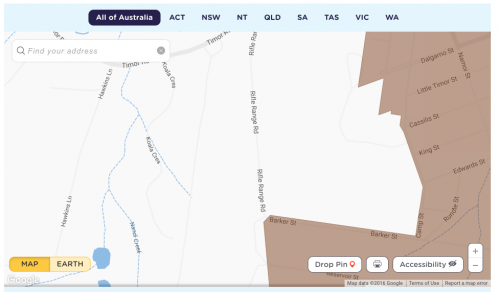 Close view of the area west of town. You can see clearly what is being left out.

Put in local addresses on the NBN site to see what information you are given. Try especially Hilton Place, Koala Place, Gardener Road and Sutton Lane.

Look at the Telstra rollout map for NBN to see a large shaded version of the rollout and see what is missing. It allows you to zoom in and check specific areas.

Get help from us today!